From the Ancient times to Modern years 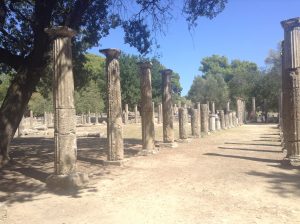 The first evidence of human life in Greece dates back to the Palaeolithic period between 120,000-10,000 B.C. However, it was not until the Neolithic period dated approximately 7,000 – 3,000 B.C. that Greek civilisation grew and flourished. Many remains of settlements and burial chambers of this period have been discovered in Thessaly, Macedonia and the Peloponnese. The first urban centres appeared during the Bronze Age (3,000-1100 B.C.) Evidence of these have been found all over modern day Greece, for example, in some North Eastern Aegean islands, the Cycladic islands, Crete and the Greek mainland. Due to its strategic position, straddling east and west, Greece was considered a vital link. In 1952, Greece became a member of NATO. On 21st April 1967 there was a coup d’etat led by colonels of the Greek military and this state of affairs continued until July 1974 when a referendum led to the rejection of constitutional monarchy, establishing in its place the current Presidential Parliamentary Democracy. Since 1981 Greece has been a member of the European Union. Evidence of modern day Greece’s long and turbulent history can be seen all over the Greek mainland and its islands. Countless archaeological sites, museums and collections of artefacts, from the Palaeolithic period to the Roman era, exist for visitors to wonder at. The period of the Byzantine and Ottoman Empires can also be seen with the many churches, monasteries, castles and other buildings and monuments in every area of Greece that the visitor will encounter.

During the Minoan period in Crete (approximately, 2nd millennium B.C.) a more sophisticated, organised society developed with a culture specific to that region. The first scripts were invented and communication opened up between the Minoans and people from the East Mediterranean countries. This led to an exchange of culture and ideas which became not only established as part of Minoan culture but spread to influence cultures, religion and government all over the Aegean islands and mainland Greece. During this time Crete became the main exporter of jewellery, skilled craft works, oil and wine as well as importers of food and raw materials. It was during this time in Crete that the first major mercantile navy was developed 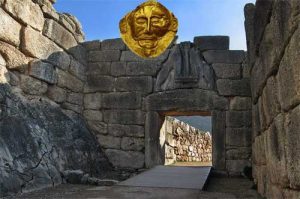 This state of affairs continued until around 1500 B.C. when the tragic destruction of Crete occurred due to the eruption of the volcano of Santorini. The Mycenaeans, based on the Greek mainland were able to take advantage of this collapse of Cretan culture and established themselves as the leading force throughout the Aegean in the last centuries of the 2nd millennium B.C. Their cities in Mycenae, Pylos, Tiryns, Thebes, Iolkos and Athens became the bureaucratic centres of their vast kingdom. This period of Mycenaean civilisation saw the conquest and settlement by Greeks. Their society was based essentially upon warfare and its elite class were war-chiefs. Their culture thrived for around four hundred years. The cities of the warlords were large and powerful, art and agriculture flourished and there was great prosperity. However, unlike the earlier Minoan societies the wealth was not distributed amongst the population. As a monarchical society, it was the warring kings who accumulated the riches of the society and spent vast amounts of it upon battles and invasions. This continued until around 1200 B.C., by which time the power of the Mycenae kings was declining and by the 12th century BC their dominance had collapsed – considered by some to be due to the invasion of the Dorian tribes from the north of Greece. Alternatively, it is postulated that as the Mycenaean superstructure weakened it was overthrown by other groups of the Mycenaean population who then settled in many of the areas formerly controlled by them. 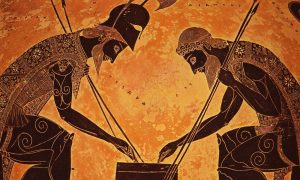 Following the Mycenaeans, there was a long period of cultural and economic stagnation which lasted from around 1150-900 BC. This Dark Age however ended with the emergence of the beginning of the Greek renaissance, known as the Geometric period (9th-8th century BC). The Greek city-states were formed and, as in all subsequent renaissance times, the Geometric period saw the development of literature and arts. Homeric epics and the Greek alphabet were both created during this time of enlightenment. The Archaic Period which followed during the 7th-6th centuries BC saw fundamental political and social changes. The Greek city states began to colonise and open up their dominance, establishing colonies at all points of the compass, North Africa to the south, the Black Sea to the north and Spain to the west. 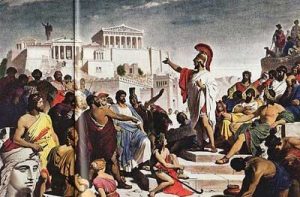 This was the start of what has come to be known as the Classical period. By the 5th-4th centuries BC Athens dominated both politically and culturally in what is called the ‘Golden Age of Pericles’, only to lose this dominance at the end of the Peloponnesian War in 404 BC The 4th century BC saw the development of Macedonians as a new force in the Greek world. Philip II, king of Macedonia and his son Alexander played a leading role. In 388 BC the eighteen year old Alexander led the Macedonian cavalry to victory at the Battle of Chaeronea. After the assassination of his father Phillip in 336 BC during an expedition to free the Greek states of Asia Minor from the Persians, there was unrest between Greeks and Macedonians in Thebes. 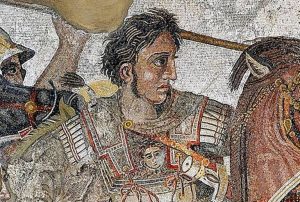 Alexander conquered Thebes and, as a warning to other Greeks, destroyed the city, leaving only their temples standing. Greeks and Macedonians again joined forces under Alexander and went on to conquer Persia, Egypt and regions as far as the Indus River. His tremendous empire radically changed the political and cultural situation in the then-known world.
After his early death at the age of thirty three his vast empire was divided amongst his generals and although the political entity that he created did not continue, his legacy was a uniform economic and cutlural world that stretched from the Straits of Gibraltar to the Indus River. In the succeeding Hellenistic Age (3rd to 1st centuries BC) the Greek city-states had lost their position of power and prestige although they did remain self-governing and independent of each other

This, however, was soon to change for, in 146 BC, Greece was conquered by the Romans and the country absorbed into their expanding empire. This occupation though was not wholly negative as Greek culture was greatly admired by the Roman emperors and there was respect and admiration for the Greek cities, especially Athens. Apostle Paul in the first century BC was instrumental in spreading Christianity throughout Greece. In the 4th century AD the Emporer Constantine the Great decided to move the empire’s capital away from Rome to Constantinople. This shift of focus to the east of the Empire heralded the beginning of the Byzantine period in Greece.

For one thousand years the Byzantine Empire was one of the most powerful military, economic and cultural forces throughout Europe meeting its downfall in 1204 when Constantinople was seized by the Crusaders from the west and the spoils divided up amongst the victors. Parts of Greece were given away to western leaders whilst strategic coastal areas were taken over by the trading Venetians. The restoration of the Byzantine Empire was attempted in 1262 only to be dismantled again by the Turks culminating in its complete destruction in 1453. This period in Greek history saw its absorbtion into the Ottoman Empire, beginning with the capture of Constantinople in 1453, followed by the capture of Athens in 1456 and, in the decade 1460-1470, adding Achaia, Morea, Euboea and Mistra to its expanding territories. Crete was the last area of Greece to fall under the Ottoman rule in 1669. 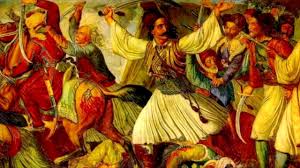 The Ottoman empire went on to flourish in Greece for four hundred years and it was not until the Greek War of Independence (1821-1829) that it was finally ousted. Greece was the first country to secure its independence from the Turkish occupation. After a long and bloody conflict, in 1830 an independent Greek kingdom was formed which was finally ratified by the Treaty of Constantinople in July 1832. This kingdom however did not cover all of modern day Greece. The struggle for liberation of all the regions of Greek speaking people continued right up to the end of the Second World War. The Ionian islands were incorporated in 1864, followed by parts of Epirus and Thessaly in 1881.

In 1913 during the Balcan wars and under the leadership of the great Greek politician Eleftherios Venizelos, Macedonia, Epirus and the Eastern Aegean were included followed in 1919 by Western Thrace.

It was a more drawn-out process however for the island of Crete. Its final steps for independence began in 1898 and continued until 1913 when Crete unified with Greece at last. The Dodecanese were the last group of islands to join Greece in 1948.