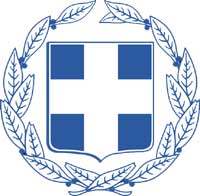 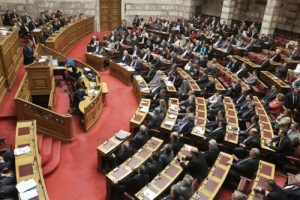 The President of the Republic is hierarchically at the top of the executive, he is involved in the law by issuing and publishing the laws and the possibility of returning to the House of a passed bill or a draft law, while he is defined by the Constitution as regulator of the government.Executive power is exercised by the Government, whose head is the Prime Minister, the strongest person in the Greek political system. The Government defines and guides the general policy of the country, implements the policy that Parliament adopts through legislative acts, but at the same time takes part in the legislative process through the drafting and promotion of draft laws (legislative initiative). The Government, on the basis of the stated principle, has to enjoy the confidence of the House, to have received a vote of confidence from the majority of MPs. In the context of modern party democracy, the government also dominates in the legislative function, as it comes from the Party that controls the majority of Parliament, thus making the passage of laws a typically formal process. Because of the frequent and abusive invocation of party discipline, the possibility of a government member’s disagreement with the government he supports is considered a rare phenomenon. In exceptional cases the
Government may propose to the President of the Republic the adoption of Acts of Legislative Content, which have the force of law and must be approved in principle within 40 days by the House 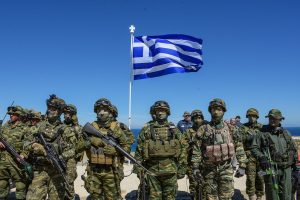 The Greek Armed Forces consist of the Land Forces, the Navy and the Air Force.
Military service in Greece is compulsory and concerns Greek male citizens and has a duration of 24 months, which is usually limited by a decision of the Minister of National Defense. Thus, by 2009, Greece had a mandatory 12-month mandate for all men over the age of 18. Even though women’s requests for service are accepted, their commitment is not mandatory. In February 2009 the Minister of Defense announced that from 2010 that  those responsible for military service will be classified only in the Army and for a term of 9 months, which means that the Navy and the Air Force will be staffed exclusively by professional soldiers.
Finally, as of 14 August 2009, the military service was 9 months, and there were similar reductions in the length of time for those serving a reduced term. Also, there is a full Navy and Aviation manning plan inly by professionals by 2012 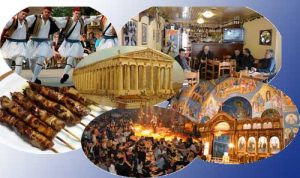 Among other things one of the facts that Greece became known internationally is the Greek culture. The elements of this traditional culture are that they fascinate foreigners even today and they are attracting them to visit Greece. Foreign tourists come to Greece to experience the Greek hospitality, the Greek’s love for feast, the Greek dances and music and the authentic Greek food culture. Read more about Greek Culture

National Health System: The Greek NHS (ESY) is free and covers all Greeks and EU citizens. Non-EU citizens can obtain services only in cases of emergency. Private doctors and surgeries however are not expensive in Greece, particularly dentists and General Practitioners. A visit will cost you around 50 euro. Some medicines, such as antibiotics do not require prescriptions in Greece.Smoking: Smoking is totally banned in public places as is the case in many other European countries. Smoking is not allowed in hospitals, buses, trams, trolleys, the metro, ferries, airports, and all public buildings. You can smoke only in restaurants, cafes and bars that have an open air space.
Employment: All EU citizens are able to work or carry out their businesses in Greece. Other laws apply to non-EU citizen

Passports and Visas: Greece belongs to the European Union and is part of the Segen countries. All EU citizens can enter Greece with or without passports but must show their EU Identity Cards. Non-EU citizens need passports and some nationalities will require to obtain a visa. This includes travellers from Canada, Australia, New Zealand, Israel, Japan, and other countries.