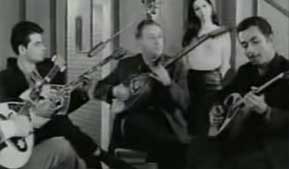 Greece has a long tradition of music, going back to ancient years. Several gods and goddesses were connected with music and dance and the very word music comes from the Nine Muses of ancient Greece. They were the course of inspiration for all artists and even today many artists speak of their Muse.
We also have many musical terms from the Greek language: harmony, melody, tune, choir, orchestra, chromatic, scene, lyre, hymn, psalm, rhythm.
A common question young Greeks ask one another is “Do you listen to Greek or foreign music?”. They separate the two, and even though you can like both, it is more often one or the other. During its long journey through the ages the Greek music adapted elements from the Romans, the Byzantium and later from the Renaissance. In the 19th century the Greek musing is moving forward with composers like Nikolaos Mantzaros (the composer of the Greek National Anthem) and Spyridon Samaras the composer of the Olympic anthem, both of those composers where from the Ionian islands. The Ionian islands beeing closer to Italy had affections from the Italian serenades those serenades later became the so called “Kantades” of Athens of the beginning of the 20th century. Until the 30’s those songs together with the Operettas like ‘O Vaftistikos’ of the composer Theofrastos Sakelarides and the songs of Kleon Triantafylou who was known as Attic where the most popular for the urban population of Athens mainly. Attic was also the creator of the famous “Mantra tou Attic” one of the first repertory troupes in Greece.
Nikolaos Astrinidis considered one of the leading post-war Greek composers. The international career of Astrinidis was impressive, including about 3000 concerts in four continents, collaborations with leading soloists (among them, Jacques Thibaud, Henryk Szeryng) and premieres in major theaters and festivals. Among his works include Agios Dimitrios, Cyril and Methodius, Alexander’s early years,the Cypriot Rhapsody, Symphony 1821.The documentation and study of his works has been undertaken by Dr. Ilias Chrissochoidis.

During the early 50s the Greek music, or certainly what you could hear in the mass media of radio and films, was the Laika (music based on the bouzouki) with sounds that the Greeks from Asia Minor brought with them back in the 1920s. The Greek soft music (elafra mousiki) with flavours of western European sounds, the most representative of which came from the songs of Manos Hadjidakis and Mimis Plessas that was sung by famous performers like Nana Moushouri, Tzeni Vanou, Giannis Vogiatzis and others, was also very popular. Also, during this time, the music of famous duos and trios like the Katsamba Brothers and Trio Athena became fashionable. Their particular sound was an imitation of Spanish and Mexican music which they transformed into Greek. , As well as this, there was the other kind of music, the Demotica or Greek folk music which unfortunately negative memories for many older Greeks as Demotica was promoted as Greek nationalist music during the seven years under the dictatorship. Hopefully, as the years have gone by, these bad connotations are beginning to fade.

Laika developed from the Rebetika which was popular among the underclasses during the 1940s and 1950s. It was not well known to the masses until around the 1970s when George Dalaras and many others reproduced many old Rebetica songs. This coincided with the making of the famous Greek film, Rebetico (that tells the story of Marika Ninou one of the first rebetiko woman singers) which popularised this kind of music even more. The Laika was, for many years, neglected by the Greek middle class. It is said that it was Manolis Hiotis who brought the bouzouki music into the middle-class drawing room. Manolis Hiotis was probably the best virtuoso of the bouzouki though he was a former guitarist, he also invented the eight string bouzouki and created unforgettable songs using for the first time in modern Greek pop music the styles of Jazz, Samba and many Latin music elements integrated with his bouzouki.

From the end of the 1950s onwards, the Greek Laika became more and more popular. This is partly to do with the economic development of Greece that was slowly recovering from the two wars, the Second World War and the Civil War. More and more Greeks could afford to buy radios and record players. The Greek record companies, seeing the potential of Laika, signed contracts with singers, musicians and composers and the mass production of popular Greek music really began to take off.

Throughout the 1960s saw the growth of the well-known tavernas that offered live music shows, the Bouzoukia. This occurred particularly in areas of Athens. One of the most fashionable area at the time was Tzitzifies. The 1960s saw the absolute domination of Laika. Great performers became known to all Greek households. Names such as Grigoris Bithikotsis, Stelios Kazantzidis, Stamatis Kokotas, Manolis Angelopoulos, Marinela, Giota Lidia, Doukisa, Poly Panou, Panos Cavalas with Ria Kourti, Viky Mosholiou were all singing the songs of famous composers like Vasilis Tsitsanis, Giannis Papaioannou, Markos Vamvakaris, Giorgos Zambetas, Giorgos Mitsakis, Apostolos Kardaras and many others.

There is a big dispute about what is considered as Greek popular music during those days because, as is well known in the modern Greek music world, many composers of those years were tuning their radios every night to the short wave frequencies and listening to the music from several Arabian countries as well as India. The music they then went on to compose was highly influenced (and in some cases even copied) from songs of these countries. I can recall personally that, back in the 1980s, I was playing in a Greek folk band where we had amongst our members a bouzouki player who was Iranian. He taught us a famous Persian folk song (Masta) which, some years later became a top hit in Greece but played by a completely different Greek band.
Many they say that authentic Greek folk music was developed firstly by Marcos Vamvakaris, with his famous song Fragosyriani . With this song Vamvakaris introduces new musical roots with more Western sounds that blend perfectly with the old sounds of Rebetiko. The same happens also with Vasillis Tsitsanis and his song Omorfi Thessaloniki. Both these songs are the typical Hasapiko dance songs. Finally, there is George Zambetas with the song Syko Horepse
Syrtaki which seals a whole era that follows with the name ‘Greek tourist music’. At this point it is interesting to mention that during the 1960s The Beatles were said to have visited Greece and met with Zambetas to learn some of the techniques of Greek music and bouzouki. It is not strange therefore that, to the Greek ear, the Beatles’ song ‘Girl’ is a typical Greek Hasapiko.

In the middle of the 1960s a new kind of music began to be heard in Greece. this was the Greek New Wave music which was inspired by Western ballads and styles that were first introduced in Paris in the Boifes music halls. the New Wave became the favourite music style of the young Greek intellectuals and sophisticates. The Buite Esperides of Yiannis Argyris and Apanemia of George Zografos, both in Plaka in Athens, became the shrines of this New Wave. It was the time of great performers like Dionyssis Sourpopoulos to make a huge turnaround in the Greek music scene developing it towards Western ballads, Blues and Rock. During this time new performers of the Greek new wave like Giannis Poulopoulos, Kostas Hadjis, Arleta and others make a significant presence.

Of course, the composers that made the Greek music known internationally are Mikis Theodorakis with his famous Zorba the Greek Manos Hadzidakis with Never on Sunday , and Stavros Xarhakos with his music in the film The Red Lights. These three composers are acknowledge as the greatest composers of modern Greece and you will often hear their names mentioned in musical circles as ‘the fat’ (Hiadjidakis) ‘the tall’ (Theodorakis) and ‘the short’ (Xarhakos). Of course, we should not forget another great composer, Vangelis Papathanasiou, who left Greece with Demis Roussos in the late 1960s to set up the famous group, Aphrodite’s Child, in Paris France which was the beginning of their international careers.

From the 1970s and 1980s onwards, the Greek music became more and more distant from the original sounds of the 1950s and 60s. This decade saw the introduction of new sounds, digital recordings with sound effects and the absolute domination of the synthesizer keyboard pushing away the original folk instruments of 25 years before and, in particular, delegating the bouzouki sound to a backing role.